The following are the most frequently used types of natural rug dyes used in hand knotted carpets. They are commonly referred to as vegetable dyes although they are primarilly sourced from insects and plants. 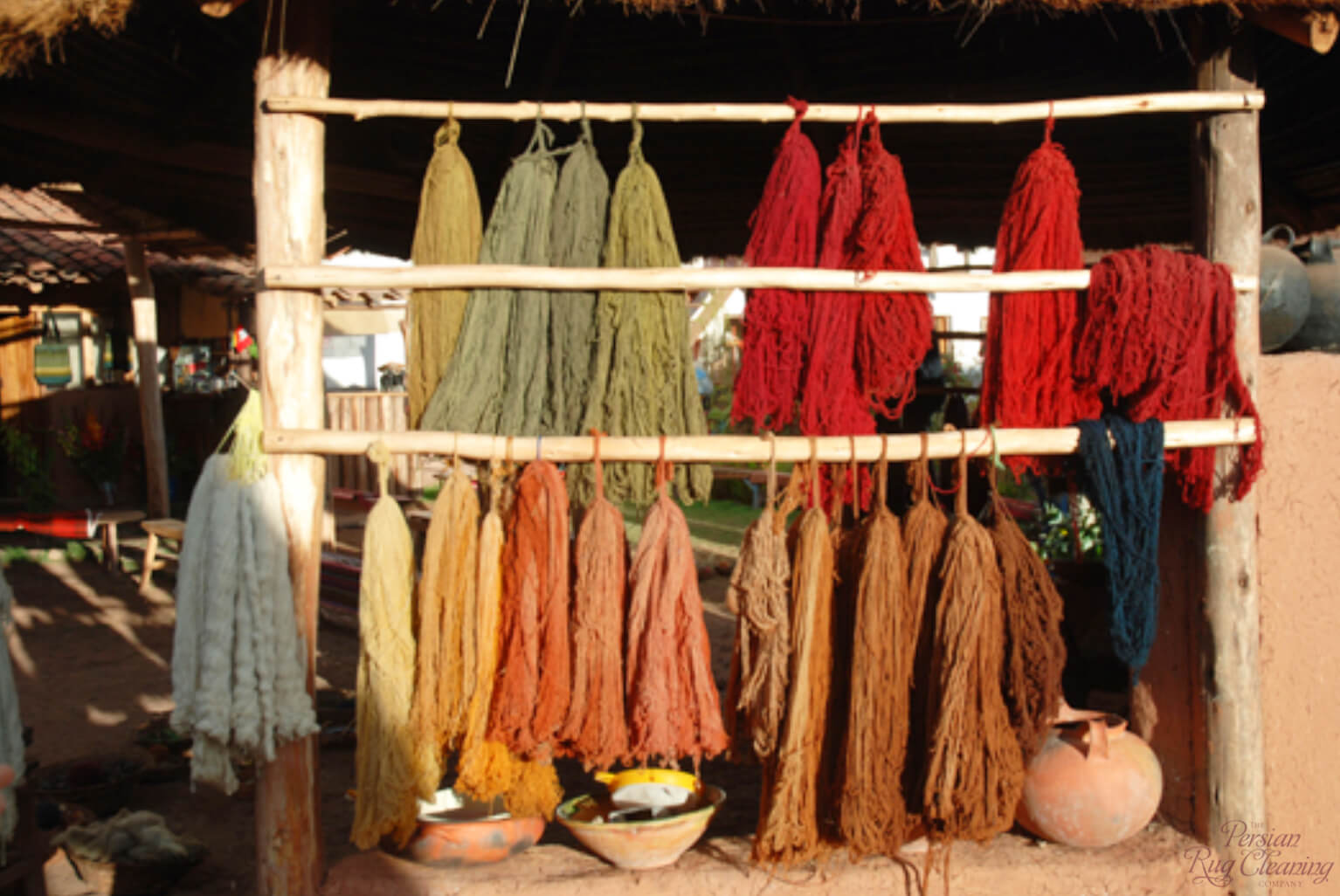 The root of madder plants (Rubia tinctorum) has been used to make red dyes for colouring textiles for thousands of years. It’s ability to be extremely colourfast and the variety of shades which can be achieved make it a popular dye for wool used in making rugs. It’s incredible potency was confirmed by John Belchier, a British surgeon working in Guys hospital. He discovered in the 1730’s that madder actually stained newly forming bones if eaten. Any rug dyer will also confirm that it is almost impossible to wash out of your skin.

Madder is a mordant dye. Before being applied the wool must first be soaked in a hot solution containing potassium aluminium sulphate (Zaj) or iron sulphate. This is the mordant (from the Latin Mordere – to bite) which bonds with the dye when it is applied and sets it to the wool. The type of mordant used will have an effect on the colour of the wool when it is dyed. Zaj will create tones which are more orangy red. Iron based mordants will result in rusty hues. Other factors which affect the final colour of the wool are the hardness of the water, amount of mordant used, soaking time, and the addition of additives (It is said that at some point in history even animal blood was added to the mix to galvanize the colour).

Madder is probably the most well known of all the types of natural rug dyes and was even popularised in a fantastic book by Brian Murphy: The Root of Wild Madder: Chasing the History, Mystery, and Lore of the Persian Carpet

Insects are also used to create various types of natural rug dyes. Carmine dye is made from the cochineal (Dactylopius coccus). This is a parasitic scale insect native to Mexico and South America that lives on the moisture of opuntia cacti. The females are collected when swollen with eggs, killed (by hot water immersion or exposure to high heat) and dried to around 1/3 of their bodyweight before being powdered. The colouring comes from the carminic acid contained in their bodies which they produce as a detterent against predators. This can be present at a concentration of up to ¼ of their dried weight. There are various techniques and recipes used to dye wool with Cochineal. Various mordants, applied before or during the dying, can be used which, along with the pH of the dyebath, all effect the final colour of the wool creating multiple possible colours.

Red dye has been extracted from the Cochineal for over 3000 years. It was exported around the world by the Spanish after they conquered the Aztecs in the 1500’s. The dyes reached India, Persia and Anatolia by 1550 via various trade routes.  The cultivation and use of Cochineal dye was soon thriving throughout the world with cacti being transplanted to the Canary Islands and other parts of Central America.

Cochineal produces a carminic dye which can be regarded as a crimson, bluish-red, or purple-red colour. This is very different to the hues achieved by madder.

Kermes is a dye which is made from the female bodies of the scale insect Kermes vermilio. The insect is native to the Mediterranean. It survives by feeding on the sap of the Kermes oak shrub (Quercus Coccifera). The dye produced is crimson in colour and has been used since the neolithic age. It’s use ceased by the 1600’s once Cochineal had spread through Europe because of it’s poor concentration levels. It takes 10 times more Kermes than Cochineal insects to produce a dye of equal potency.

Lac has been utilised in India for the dying of wool and silk since ancient times. It is a cool red colour however when dying wool or silk the desired tint can be obtained depending on what type of mordant is used.

The dye is extracted from the crude shellac resin of the Lac insect (Laccifer Tachardia Lacca) which is cultivated in south east Asia. Some historians believe it’s name is  from the Sanskrit word ‘Lakh’ for one hundred thousand. This is in reference to the high number of insects required to create a usable volume of dye.

The insect secretes a protective coating onto it’s host tree after sucking the sap out of it. Two of the most common trees it is found on are the Juniper tree (Rhamnus jujuba) and the Banyan tree (Ficus benghalensis) although it is also found on many other trees and bushes throughout south east Asia including the Kusum tree (Schleichera trijuga)  and the Dhak (Butea monosperma).  Harvesting involves removing the sap and insect coated twigs (sticklac) from the host tree and breaking them into small pieces. These are then powdered before being soaked in water to remove the insect bodies and tree debris. Further processing is then carried out to produce the finished dye for use.

Indigo dye has been utilised since ancient times and evidence of it’s use has been linked to our Neolithic ancestors, the Romans, the Japanese during the Edo period, and the Spanish in central America during the 1500’s. It is harvested from the leaves of the Indigo plant (Indigofera tinctoria) which gets it’s name from the roman word ‘indicum’ meaning product of India although it is cultivated all over Asia and many parts of central America.

Indigo belongs to a group known as vat dyes which are not water soluble. It is also unique in that it doesn’t require a mordant when it is used to dye any natural fibre.

The colour comes from Indigotin which is converted from Indican in the leaves by fermentation in water. The dye must be chemically reduced (oxygen-free) in order to become soluble in a strong alkaline. The material being dyed can then be introduced to this vat bath, where the dye is now in soluble form, for a short period of time before being removed which immediately begins re-oxidisation thus converting the dye back into an insoluble state. The dye goes from being yellow in the dye bath, to green once exposed to oxygen and then blue as oxidation occurs. The dyed material is then rinsed to remove excess dye. Finally it is neutralised with an acid to prevent degradation of the fibres.

Natural Indigo can produce colours from light blue to almost black. It’s use is now very limited due to the much cheaper synthetic variant which is chemically identical. Despite this collectors will always prefer a rug dyed with natural Indigo due to it’s visually appealing abrash and exceptional lightfastness.

Indigo colour was also chemically extracted from the dyer’s woad plant (Isatis tinctoria) although it yields a far lower concentrations of dye.

Plants are used to make the yellow types of natural rug dyes. One of the most popular used in rug making is Weld (Reseda luteola) which yields an extremely bright, intense yellow.  Dyer’s mulberry (Maclura tinctoria) can be used to make various shades of gold, khaki and greenish yellows depending on the mordant used and is also extremely colourfast. Other sources are Buckthorn (Rhamnus petiolaris) berries, wild chamomile (Anthemis chia) which is used extensively in Anatolia, Tanner’s sumach (Rhus coriaria) leaves, and Pomegranate (Punica granatum) rind which is cultivated in most major rug weaving areas such as India, Iran, Azerbaijan and Afghanistan. Turmeric is also used in some areas.

There are different techniques employed by rug dyers to produce black. The method used by many tribal weavers is to use iron salt (ferrous sulphate) in combination with oak galls or acorn cups which are very tannic. The iron salts act as both a mordant to set the dye and as a modifier which darkens most colours it is applied to (with the exception of woad or indigo). The drawback of these dyes is that the Iron sulphate degrades wool over a long period of time. Therefore the use of these dyes is easy to spot in many antique rugs of tribal origin, such as those of the Turkmen and Balouch, because the black areas are visibly corroded.

A safer method used to create black is to use a dark yarn and dye it dark blue.

Even more skill is required when creating dyes for rug weaving which are shades of green, purple and salmon.  Most colours other than the primary colours are created by combination dying or by sun fading. There is no doubt that other types of natural rug dyes are created throughout the world with their exact recipe being kept secret.

This site uses Akismet to reduce spam. Learn how your comment data is processed.

What Our Customers Say !

I rely on The Persian Rug Cleaning Company to maintain many of our residents’ rugs and soft furnishings. One Hyde Park Apartments is the world’s most exclusive private residence serviced by only the very best companies in their respective fields of expertise. Nick and Dasos are knowledgable, trustworthy and irreplaceable, making them my only choice when rug and fabric care is required.

Sign up to receive email updates and to hear what's going on with us!